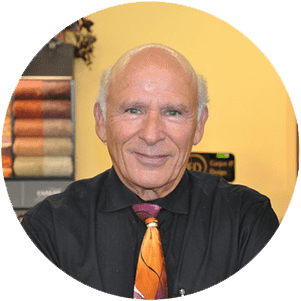 Personal History
Sam is "The Boss", the CEO of G. Fried Flooring & Design for over 35 years, with over 47 years of experience in the retail and carpet industries. At 21, after graduating from Brooklyn College, Sam began working as a traveling salesman, and although his least favorite job was waiting tables, he did pretty well at the Black Jack tables, not as a player, but as a dealer! Not too long after, he married "the love of his life", Gaye, and together they have 4 children, and 7 "outstanding " grandchildren, as he puts it

Sports
During his school years, Sam played baseball, likely influenced by his favorite all-time athlete, Willie Mays. He was also into fencing, but his favorite sport overall is football. A Jets fan since Joe Namath first took the field in 1965, Sam is one of the rare "New York" football fans, cheering also for the Giants, who gave him his favorite sports moment when they won the Super Bowl in 1986. At age 12, while it may not have been a Super Bowl, the thrill of winning a brand new football remains to this day as one of his favorite moments from his childhood. More recently, Sam has found a new love for white water rafting, locally for now at The Delaware Water Gap, with his ultimate goal (and #1 item on his "Bucket List") being to raft down the Colorado River.

Hobbies/Interests
Sam enjoys cars as a hobby, and one day would love to own a Bentley, his dream car. He also enjoys traveling, making a few trips to Florida each year, and dining at his favorite restaurant, Chops Lobster Bar in Boca Raton. Israel is the one place Sam has always wanted to visit; until then, his favorite vacation spot has been Aruba. Living so close to New York City gives Sam the opportunity to visit there often, usually for dinner or to catch a Broadway play, making it his favorite city in The United States. As for other interests, Sam describes his singing as "eh" and his dancing as "so-so", but as for cooking, he's"pretty good"

Speed round
Favorite Carpet Mill: Fabrica
Favorite Color: Black
Favorite Current TV Show: Black List
Favorite Type of Carpet: Shag
Favorite Food: Italian
Favorite TV Show Ever: 24
Favorite Holiday: Chanukah
Favorite Drink: Diet Coke
Favorite Movie Ever: 10 Commandments
Most Famous Person Met: President Nixon
Best Concert: Neil Diamond
Favorite Musician(s): The Bee Gees
If Sam found $1 million in cash, he would: Find out who lost it
If Sam wasn't the CEO of G. Fried, he would: Have a career in law
If Sam was stranded on a desert island, the 3 things he would want are: A phone, food, vodka, and of course, his wife Gaye (ok that's 4 things, but he's the boss!