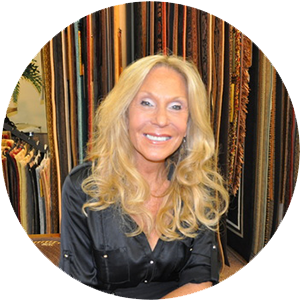 Personal History
Gaye is the CFO of G. Fried Flooring & Design, now for over 25 years. The life-partner and business-partner of the CEO Sam, she has over 30 years of experience in the retail and carpet industries. Gaye began her working life at age 20, at the famed 34th Street Macy's in New York City, and then later at an insurance agency before coming to G. Fried. Her least favorite job was also in New York, at S.H. Kress &Co. Not too long after, she married "the love of her life", Sam, and together they have 4 children, and 7 grandchildren. Gaye has 1 sister.

Hobbies/Interests
Gay enjoys a variety of things outside of work; when asked what her hobbies & interests were, her first response was her grandchildren, whom she loves immensely and gets to see often. The second thing was the beach, so a perfect day for her would be to take the grandchildren down the shore! Whether it’s her favorite city Boca Raton, her favorite island Aruba, or even California (excluding the trip back in’69), Gaye will never be far from a beach when on vacation. She would love to one day go to Italy, but maybe not more than she wants a Jaguar convertible! Her favorite lucky number is 18, and since she does not believe she would ever hit the Powerball, horseback riding and guitar lessons are two much less expensive items on her bucket list. Gaye is a self-described “early riser”, “thinks” she can sing, visits New York “as little as possible” except for Broadway shows & dinners, and can cook a mean brisket, despite describing herself as a “fair” cook. But she can definitely dance, proven “long ago” by appearing on TV, on “The Alan Freed Dance Show”! Gaye will take her blinged-up I-Phone to visit her favorite website Google, to check up on the G. Fried website, and even to Facebook. Oh and the best thing Gaye ever won? Her husband!

Speed Round
Favorite Carpet Mill: Stanton
Favorite Color: Black
Favorite Current TV Show: Homeland
Favorite Type of Carpet: All of them! (Don’t be silly)
Favorite Food: A bagel w/butter
Favorite TV Show Ever: 24
Favorite Holiday: Thanksgiving
Favorite Drink: Iced Coffee
Favorite Movie Ever: The Way We Were
Most Famous Person Met: President Kennedy
Best Concert: Neil Diamond 2003
Favorite Musician(s): (No answer)
If Gaye found $1 million in cash, she would: Scream!
If Gaye wasn't the CFO of G. Fried, she would: Be laying on a beach in Florida
If Gaye was stranded on a desert island, the 3 things he would want are: Music, food, Grey Goose, and her husband Sam (again, 4 things, but you don’t argue with the CFO!)

Gaye's quote
"If those who can, don't, then who will?"